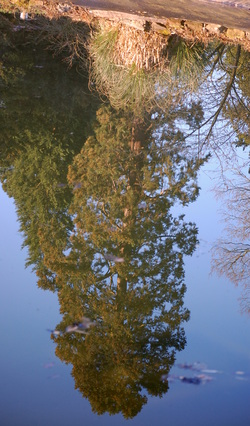 It was as if the old Catholic priest had disappeared into thin air.  No trace of him anywhere.  Everyone was worried.  What could have happened?
The following month, when the Rotary Club met, he was there, sitting in the corner
as usual.
“Father where have you been?”
“I’ve just served 30 days in prison.”
“In prison?  You wouldn’t hurt a fly.  What happened?”
“It’s a long story.  I was going into town for a diocesan meeting.  I was standing on the platform, waiting for the train, when a beautiful young woman appeared on the arm of a policeman.  She looked at me, turned to the constable, and said, “He did it, I’m certain he’s the one who did it.”  Well, to tell you the truth, I was so flattered I pleaded guilty.”

Why is it funny?  Incongruity. The oddness of beautiful young woman being put with elderly, celibate priest.  It’s the surprise of it -  although you may have had an inkling that it was going to go in that direction.  Expectation and surprise!

I have three daughters.  Before every child we’ve had a new dog as practise!  So our dogs always a little older than our children.  Just a quip.  Yet there’s an element of truth in it.  We all know, or we think we do, what a new baby is like.  We spend a lot getting ready.  But when the child arrives things are always different - the needs, the demands are insistent and of an amazing intensity.  All encompassing, the day is never long enough.  There is always something more that
could be done.  How did we have time to wash cotton nappies? Expectation and surprise!

Jesus had sent his disciples out on their first mission.  They return tired and with so much to talk about.  "Come away to a desert place, time to talk, to think." But no, the crowd are there again. No deserted place, no space. Expectation and surprise!

I used to work with a professor called Bernard.  Going to his office and sitting down but before you could get a word out, a knock at the door.  A student with some question, problem, or need of advice.  Bernard would get up from his chair, answer the door and the problem. It happened over and over again.
“How do you get any work done with so many interruptions?”
“I used to resent it, the continual interruption of my work," he said, "but then one day it dawned on me that the interruptions were my work.”

He could have locked himself away, but he didn’t.  Very popular with students.  Unselfish sharing of self – to set aside our feelings and plans is often a real sacrifice.

Jesus too had to cope with those surprising interruptions - received people in their time.  Baptism says that God is always like that, and that we who are following Jesus must be like that too.

[A rabbi tells the story of two men doing the daily prayers whilst at work.  One spends twenty minutes in his office behind a closed door and afterwards feels refreshed and uplifted, like he had just has a therapy session.  The other is so busy he can squeeze in only a five-minute prayer session between phone calls. He recites his prayers superfast in a stationery cupboard.  “Who has done the better thing,” asks the rabbi.  The disciple replies, “The first.”  “No” says the rabbi,
“the second.  He was doing it only for God.  He was sacrificing his time at no benefit to himself.”]

That great defender of the poor, Helder Camara, wrote: "Accept surprises that upset your plans, shatter your dreams, give a completely different turn to your day - who knows? - to your life.  It’s not chance.  Leave God free to weave the pattern of your days."

I read somewhere of a bloke who went on one of those wilderness holidays.  You know, you take all that you need with you in a backpack and join a guided party that lives in the wilds.  This particular one was in the forests of Canada and followed a great river – each participant in a canoe.  Each day they would make camp in on a beach, or in a forest clearing, or on an
island.  Never any roads or other signs of civilisation – just the river, the valley edge, the green forest.  During one meal rest the holidaymaker was talking to the guide, "Ah, these days have been such a wonder, so unusual, no television, no computers, no newspapers, no radios.  In fact its going to be really strange to go back home and find out what’s been happening in the real world." There was a still hush.  No one spoke, then without taking his eyes from the green horizon the guide said, “I assumed the real world was what you came here for.”

If you remember these incidents take place in Mark’s gospel around the story of the feeding of the five thousand.
In that story we are told that the disciples were reluctant even to try to feed the crowd, the mob. So, many times, we also are reluctant.  We believe what we bring to God's needy people is insufficient, inadequate to be of use.  Or we are exasperated and can’t be bothered.  When we don’t feel up to the task or when we don’t think we can face the
task, shouldn’t we at the least look to Christ’s way with the pressing crowd, and say as he said over the fives loaves and two fishes: "Thank you for the little I have to bring, O  God; bless it and make it enough, I pray."

Jesus is walking among us today, filled with compassion, searching for each one of us, even for those we find ourselves reluctant to help. Jesus is walking slowly, shaking the bucket--or the basket--and calling us to the feast, to the miraculous feeding that brings us home, that reminds us of who we are, whose we are. Maybe we'll hear--and remember.  Remember a God who knows our need and can always meet it, however unexpected it comes.