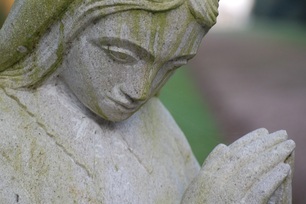 The American comedian, Mark Russell, has written a politically correct Lord’s Prayer that goes like this:
Our Father or Mother,
who art either in Heaven,
Nirvana, Mecca, or Salt Lake City,
hallowed by Thy name.
Thy kingdom come,
Thy will be done,
providing Thy will is that America is always the big winner over the foreign heathen.
Give us this day our daily white bread, black bread, Italian bread, Jewish rye, English muffins, or tacos, and a quarter-pounder with cheese and a large fries to go.
And lead us not into temptation,
or into school buses that take us to neighborhoods where the kids are different.
For Thine is the kingdom and the
power and the glory,
especially for people who still
use words like ‘Thine.’

Like any great satirist his humorous digs get a little too near the bone for comfort. We’ve repeated the Lord’s Prayer so often that we’ve forgotten its pointedness. The idea and security of a universalist intention comes so easily to us we just don’t notice its particularity. Russell’s version shakes us up and makes us look at these familiar words again.

The notion of a very particular boundary is right there in the opening of the prayer: ‘hallow be your name.’ ‘To hallow’means to set apart as sacred, religiously special and not mundane. It signifies the creation of a boundary. The thing or person ‘hallowed’ is no more seen as part and parcel of the ordinary experience of life. ‘Hallowing’ sets
something apart from the commonplace; it is now exclusive, reserved, and out of the everyday common round of what is shared between us. ‘Hallowing’ makes something exclusive; it draws a line around something as pertaining specifically
and especially to this set of people and not that set of people. We naturally think of those closest to us, and indeed the property that is ours, as our own in a very particular way and we resent others’ making any claim on what we think
of as ‘ours’ – what we have hallowed. Malina and Rohrbaugh (Social Science Commentary on the Synoptic Gospels, 2003, Fortress Press) point out, in the Lord’s Prayer ‘God is commanded to “hallow” his person, his status as God, that is, to act and thus reveal himself to be the God he is, to make known his exclusive personage.’ The Lord’s Prayer is very ‘particular’ in its thoughts about God and about people.

The disciples ask Jesus to teach them how to pray – just as John’s had taught his disciples – and what we know as
the Lord’s Prayer is his answer. This is a direct response to their plea for learning they can make their own. Their plea stands for us as well; through what Jesus said to them, we are to learn the Jesus way of praying. Luke the gospeller has set it down in such a way that we can eaves-drop on Jesus and make that same learning our own. So what are we to draw from these very ‘particular’thoughts and directions?

First, we are to address God intimately. God is not a principle; nor a remote authority figure; nor an ‘unfathomable force’ barely glimpse-able by our puny conceptions. No, God is like a loving parent – the metaphor here is, of course, a father since the patriarchal structure of the society of Jesus’ day meant that kindly, guiding, knowledgeable, care-full, loving couldn’t be expressed otherwise. Nowadays we might substitute parent or another wholly dedicated care-giver, but the point  holds true – that intimate, totally trustable and personable other on whom we rely. The Holy of Holies is that close; that concerned; that tangible.

Years ago I worked for time in an orphanage of extremely impoverished children in Zimbabwe. Most of the 200 or so kids there owned nothing of their own at all – even the clothes they wore we owned by the home. One day a distant relative of one child arrived to visit. After an hour or two, the relative left to journey back to his faraway home but he left with the child a small metal toy tractor. It was the only commercially produced toy I ever saw there – although the children were adept at making toys out of rubbish and scrap. Anyway, the little boy with his tractor rushed to show it to the orphanage Principal. Although the room was heaving with children, the Principal took the lad on his knee and focused his whole attention on him for may be 30 minutes. The two talked about the delights of this toy, and the small boy radiated joy as he ran the tractor across the Principal’s hand and arm. The first thing the ‘Our Father’ says about prayer is that God holds us in that rapt attention of delight. That’s God hallowing us – and that mean’s God is hallowed by our similar hallowing of him and each other.

Second, we are to pray for the coming of the kingdom. Our first focus on change in prayer is to be the change that the Kingdom of God produces; what does anticipation of God’s perfected rule do for how we experience and see the world? Don’t focus on your own needs and wants; don’t even focus on the common good as perceived by human ambitions and
perceptions; but focus on what God intends. This isn’t only about God's heavenly kingdom which will reign at the end of this world as we know it, but it is also about God's kingdom already being realized in human experience and action. How are we going to recognize it? How are we going to work for that kingdom unless we are guided to glimpses of it? We pray that we may have the vision to see God’s rule and be part of the action for it.

Third, we are to pray for daily bread. In other words our prayer isn’t all about grand ideals and great causes, it’s also to be about the commonplace of our bodily needs. But those bodily needs are for each in association with all – give us each our
daily bread. My needs are to be fulfilled in the meeting of all needs. Jesus’ disciples in his own day and those in the generations immediately after, went about witnessing to God’s rule and Gospel grace without knowing where their next
meal would come from. Theirs was a prayer prompted by daily dependence on God’s providence. That continues to be the reality for many of our fellowship – we can never say this prayer without thinking on them and making provision for them.
There is always an including ‘our’ in this prayer. Whether it’s food, employment, health care, education or whatever, the burden of this prayer is that daily needs must be our shared responsibility. My needs are not prayed for at the expensive of another’s. Prayer must not inoculate us to the awful realities of the unequal distribution of the basic things of living, and how many lives are blighted as a consequence. That’s a hard reality to live with – we either ignore it – and that’s an attitude that can’t fit with our urging of God’s rule; or we confront and confess our horrid complicity – and that leads us
to the next part of Jesus’ teaching in Luke.

Fourth, we pray as those forgiven and forgiving. In Matthew’s version the prayer is ‘Forgive us our debts, as we also have forgiven our debtors’ (Matt. 6:12). It sounds like we are asking God to forgive us only if we forgive others first. In Luke it reads rather differently. Did you notice that the petition for forgiveness does not have a conditional clause in it? It suggests that the deal is already done, there is no ‘as’ about it. We are God’s hallowed people; we forgive others –
full-stop. ‘Forgive us our sins, for we ourselves forgive everyone indebted to us.’ That’s it – no argument, no qualification, and no justification – just forgiveness. That’s an exacting thought and a hard to live by principle, but an unavoidably part of the Jesus way. Such collective forgiveness expressed in every individual’s intention and action changes the world. Isn’t that where we began? ‘Your kingdom come.’

And fifth and finally, we pray as those knowing how easy it is to avoid such prayer. This Jesus’ praying comes
hard. It asks so much; it shifts our balance; and changes our vision. The temptation towards avoidance is ever with us. ‘Can I really pray like this?’ Use these words, says Jesus, they tell you the depth of what we’re about: ‘And do
not bring us to the time of trial.’ That underlines the exacting nature of this prayer – but can it be that God puts us repeatedly to that kind of a test?

Perhaps there’s insight here to be drawn from the account of Jesus in the garden of Gethsemane (also in Luke’s
Gospel). In the story Jesus twice tells his disciples to pray that they may not come to the time of trial (Luke 22:40, 46). The first request comes immediately before and the other immediately after Jesus’ own request not to enter into a time of trial when he prays, ‘Father, if you are willing, remove this cup from me’ (Luke 22:42). The New Testament scholar, R.E. Brown, makes the point that Jesus’ request was not granted. Instead he was given strength through the
intervention of an angel (Luke 22:43). Brown says that such divine angelic help was a feature of Jewish martyr stories and in turn became a feature of Christian martyr stories. Those who prayed not to endure the time of trial but nevertheless
did so; received in that trial, divine assistance. Could it be that this final clause in the Lord’s Prayer is making the same point?

This prayer is not make-believe or wishful thinking. Praying this prayer opens us to the possibility of heart, body and soul trials – temptations that may ruin, confuse and torment us. Yet even in those times, and fearing those times, we pray as those certain that God will provide the strength we need.

‘What deep mysteries … are contained in the Lord’s Prayer!' wrote Saint Cyprian (c.200-258). He went on, ‘How many and great they are! They are expressed in a few words but they are rich in spiritual power so that nothing is left out; every prayer and petition we have to make is included. It is a compendium of heavenly doctrine.’

May God give us the grace to make that digest our own.