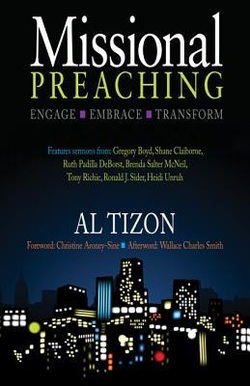 This is a book that needed to be written. Professor Tizon seeks to give shape to what missional preaching should  look like. His diagnosis of lifeless sermons and lifeless churches is that preaching fails to give voice to the inherently missionary character of the Bible. Anyone who heard the late Lesslie Newbigin preach will immediately understand Tizon’s point (and he mentions Newbigin at several places). Somehow our preaching has become too small. The mission of God, says Tizon, should be the very heart of every sermon. Whether the reader agrees or not, Tizon makes a clear and forthright case.

At only 170 pages, the book is brief and constantly on task. Three opening chapters delineate the essentials of missional
preaching. Seven further chapters then detail what Tizon describes as the goals of missional preaching. Those goals with their contemporary social contexts give a good indication of Tizon’s approach: inculturation amidst an us-and-them mentality; alternative community amidst cultural conformity; holistic transformation amidst a false dichotomy of evangelism and social concern; justice and reconciliation amidst gender, race, and class privilege; whole-life stewardship amidst materialism, consumerism, and environmental abuse; consistent life and peace amidst violence and death; and finally, the uniqueness and universality of Christ amidst religious pluralism. Tizon deals with large themes from recent missiology in an engaging way. Indeed he offers a way into some of the most influential recent thinking that is itself a gift to anyone wanting an introduction to what are often hefty texts. Although Tizon writes determinably from an evangelical perspective he draws on a wide stream of influences.

As Tizon makes plain from the very beginning, this isn’t a how-to-do it manual. Readers will have to think carefully about how to give mission the prominence suggested here. But that is, perhaps, one of the key issues Tizon is trying to persuade his reader towards. It is part of the preacher’s discernment and local expertise to ask how this biblical text addresses the mission of God in this locality now. Each of Tizon’s seven goals has the full text of a sermon accompanying it so that the
reader can see how a particular preacher has done that. Ronald J Sider and Ruth Padilla DeBorst are amongst the preachers quoted. Tizon’s teaching experience is disclosed in the frequent summaries included, as well as section headings and tabulations of topics. A self-help book it may not be; but it is nevertheless a very practically orientated study.

Undoubtedly some of Tizon’s conclusions are likely to be disputed by readers. This isn’t a dispassionate and remote
work; it aims to stir and provoke. But that is one of the reasons it is so eminently readable. Others on this side of the Atlantic, no doubt, will find it too American – although numerous non-American authors are amongst the references.
To this reader, its very cultural rootedness is one of its attractions. Anyone with a little imagination can easily make the trans-Atlantic translation. Thoroughly recommended.

[First published in The Preacher, number 147]