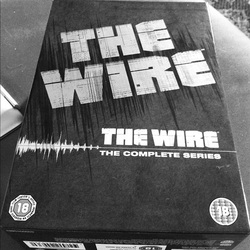 Swearing brought me to understand something of today’s
gospel; the swearing of the characters in the award winning TV series The
Wire.  Though I’m not really sure it counts as swearing as my dictionary says an expletive is an exclamation and the words used in this story occur far too frequent to be exclamations.  They are often literally every other  word.  The warning is ‘Strong language from the start’ and the warning stays on the screen for minutes to make sure you’ve got it.

Why such language?  The drama deals with the street drug scene in the western part of the city of Baltimore. But unlike the usual police drama it makes little or no concession to the audience in explaining what’s going on. Poirot or Inspector Jack Frost this is not.  No disguised plot explanations, no reviews of evidence, no referencing of possible outcomes. Instead the audience eavesdrops on an ever-changing sprawl of encounters and snippets of conversation, sometimes from the point of view of the drug barons and their minions; sometimes from that of often highly cynical police officers; sometimes
from that of manipulative local politicians; and sometimes from that of ordinary folks embroiled in the hurts of communities failing apart.  It is disturbingly realistic.  Strong language from the start.  It’s as if you’ve been dropped into a foreign land with no idea of the language:

“Dowg, yu al upon me.”
“If I see any yu little hopers even smile at a motor it’s gonna be my people settling up wid yu in the alleys.”
“Dowg, I do ma work.  Why yu al upon me?”

And that’s where the swearing comes in.  The audience eavesdrops on the language of the street corner drugs
trading of west Baltimore.  Every other word begins with f or s, plus all the invented words and euphemisms that
are common currency there.  As one of the actors put it, this was the first time he had received a script in
English that needed a glossary.  Strong language from the start.

Technically this is an ‘antilanguage,’ a special language used by an identifiable alternative society that exists within the dominant society: antilanguage for an antisociety.  The language marks the boundaries of their resistance to society at
large, their alternative to it, their hostility towards it, their identity as different from it.

We are not talking jargon here.  This isn’t like all that stuff so often in the headlines now.  You know, “quantitative easing,” “job disestablishment,” “collaterised debt obligations,” “leveraging,”and “sub-prime mortgages” – and all those other economic euphemisms for a money mess.  That’s not strong language, that’s just a cover up.

No, this is the language of a marginalized in-group that changes meanings and multiplies words for the same things in order to create a different world and a different people.  An antilanguage of an antisociety.

To those outside the Jesus group this is offensive, even gross language.  In Israel’s tradition all human beings are prohibited from eating flesh with the blood in it.  Blood was thought of as the life itself, and that could only belong to God. It is God who gives life; therefore it is only God who can receive back the life.  Anything else is redolent of witchcraft
according to Leviticus.  So the prohibition could not be stronger. Add to that the thought of cannibalism – well?!
Many must have heard these words with disgust.  Strong language from the start.

But for the Jesus group the words mean something quite different.

The characteristic of antilanguage is that is has a range of words for the same thing that go over the central concerns of the group again  and again, as well as throwing up entirely new words for those concerns.  Think of John’s contrast of those who live alongside Jesus which he describes in terms of spirit, above, life, light, not of this world, freedom, truth, love, that new  reality; as opposed to those who don’t live in the Jesus relationship described  as flesh, below, death, darkness, this world, slavery, lie, hate, that’s the old reality.   Or think of all the words he uses for discipleship: believe, come, abide, follow, love, keep words, receive, have, see.  Words and meanings piled on one another.  In John’s gospel this range of words is often demonstrated by a sequence of ambiguity, then misunderstanding and then
clarification.  That sequence is in today’s gospel: Jesus says, “I am the living bread.”  They reply, “How can this be?”
Jesus amplifies the notion of eating his flesh and drinking his blood.  But here many find the amplification hard, even offensive (verses 60 and 61 that we didn’t hear today).

So what are we, the Jesus people to make of this language of eating flesh and drinking blood?  Clearly it is related to Israel’s tradition of sacrifice.  For John, Jesus is the sacrifice.  And yes, the community from which John writes is alienated, threatened and fearful – an antisociety that knows itself separated from the wider society. Yet John is certain that God so loved this alienating world that he gave his only Son (3.16) – poured out his life for the sake of the world.  Yes, Jesus has been crucified, sacrificed – ‘lifted up,’ ‘glorified,’ in John’s language – yet his people can still receive him, accept him, welcome him, and believe in him.  This is to eat his flesh and drink his blood.  “To all who received him,
who believed in his name, he gave power to become children of God, who were born, not of blood or of the will of the flesh or of the will of man, but of God.”(1.12-13)  Through ingesting this life, this Jesus flesh and blood, through receiving and welcoming Jesus, Word of the Father become human, crucified as a would-be peasant king, those who believe in Jesus receive new life as children of God.

As we heard in our first reading, the Wisdom of God says “Come, eat of my bread and drink of the wine I have mixed.
Here Wisdom is personified as a woman preparing a feast, laying the table, and calling the guests to come.
She pours herself out in labour that others may feast.  This becomes linked with the idea of mother’s milk, also associated in  rabbinical and mediaeval texts with the life inherent in blood.  The woman Wisdom pours out her life in love for her child.   Or as Mother Julian of Norwich wrote in the fourteenth century, “Our beloved Mother Jesus feeds us with himself. ...  Our tender Mother Jesus simply leads us into his blessed breast through his open side, and there gives us a glimpse of
the Godhead and heavenly joy – the inner certainty of eternal bliss.”

We have to learn the art of a God who pours himself out  for us.  We must abide in him,  follow him, have him, and keep his words, so that we dare to be known as his people whatever the world says. We must receive him, welcome him, believe in him, feed on him, that he can bring to birth us that same outpouring, even towards those who despise us.

O God who took human flesh
that you might be intimate with us;
may we so taste and touch you in our bodily life
that we may discern and celebrate your body in the world,
through Jesus Christ. Amen
Janet Morley


This script draws extensively on Social-Science Commentary on the Gospel of John by Bruce J Malina and Richard L Rohrbaugh, (1998), Fortress Press, Minneapolis