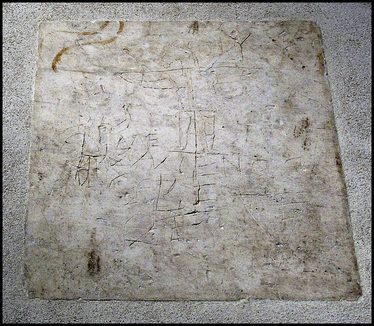 The Alexamenos graffito, photo credit: Comrade Foot / Foter.com / CC BY-SA
One morning I shot an elephant in my pajamas. How he got into my pajamas I'll never know.

Why should I care about posterity? What's posterity ever done for me?

In the middle of the second century a boy in the boarding school for the imperial pageboys in Rome used a nail or something similar to scratch a crude cartoon in the plaster of their quarters. The picture shows a man with a donkey’s head being crucified. Just in front of the cross stands a boy raising his hand as if in prayer. And scrawled across the picture are the words, ‘Alexamenos worships his God.’ Boys will be boys they say, and this seems to prove the point. It appears to be a mocking parody by classmates of a boy who is a Christian. (It’s now in the Palatine Antiquarium Museum in Rome).

Apparently Alexamenos held on to his faith for close-by there is another scratched inscription and this one reads ‘Alexamenos is faithful’ – the tit for tat response that again seems typical boy behaviour. Were these his own words to
those who mocked him? Or was it written by someone who took his side? We don’t know. All we can say for certain is that there was a cruel humour at work in this farcical cartoon. We can only imagine how Alexamenos felt.

Why a donkey crucified? Donkeys in the ancient world were seen as incredibly economical and able to work for long hours – a symbol of endurance, tenacity and strength. But they were also a symbol of stupidity, stubbornness and sloth. Over time it was this metaphor that came to dominate. So the great orator Cicero (106-43 BCE) calls one Calpurnius Piso a donkey of a man, incapable of being taught letters, one to whom words were no use, who could only be taught with fists and sticks. A right donkey. All that was foolish and idiotic.

Before Christianity, Jews were slandered as worshippers of an ass. And Christians came to be accused of onolatry – donkey worship. So Minicius Felix (active somewhen in years between 150 and 270) wrote, ‘I hear that they adore the head of an ass, that basest of creatures, consecrated by I know not what silly persuasion – a worthy and appropriate religion for such manners.’

Two preachers, Charles Campbell and Johan Cilliers, who’ve written a remarkable book called ‘Preaching Fools’ (Baylor University Press, 2012) put it like this:
‘The message of a crucified God, coupled with the image of a donkey, was thus seen by many, actually by the majority, as stupid and inappropriate, as utter foolishness. To pagan ways of thinking the whole notion of a crucified
donkey-God seemed to be completely contemptible, totally scandalous and nonsensical, and utterly laughable and absurd. In short, the connection between a crucified God and a donkey expressed in a striking way the folly of the cross.’ (page 5).

We find it hard to appreciate how nonsensical, absurd, even disgusting, God dying on a cross was thought to be. Crucifixion and God just don’t fit. It’s a scandal. It’s absurd. It cannot be. Our early forebears in the faith were persecuted for their atheism because their contemporaries couldn’t link God with the cross. This was beyond imagining, beyond sense, – beyond indeed anything. It could not be about God. ‘Alexamenos worships his God,’ which, of course, to the one who scrapped the nail in the plaster, meant no god at all, because the idea of a crucified God is donkey folly. Utterly stupid.

But today is Palm Sunday and Luke’s Gospel directs us to Jesus riding a young donkey into the festival royal city. ‘We have a king who rides a donkey,’ and it’s true, as farcical as it seems. Later the church is going to get worried about this element of farce and will read into what happened a portentous prophecy from Zechariah:

Tell the daughter of Zion,
Look, your king is coming to you,
humble, and
mounted on a donkey,
and on a colt, the foal of a donkey.

But Luke will have nothing of that. The human being who has no place to lay his head, is the same ‘king’ who owns nothing and must borrow even a donkey. This is a paradoxical reversal of the kingship of David – made all the more compelling if it was the Horse Gate on the east side of Jerusalem that he rode through.

The great reversal – Luke was rather hot on that – after all he told the story of the Creator of the universe being born in a stable, next to the donkey, because the world had no room for him.

So Jesus enters the city with all the trappings of a great military procession of a victorious hero. And the people get caught up. There’s much cheering, and palms are cast on the highway, and songs of triumphare sung. Jesus comes to claim his own – his royal city – on a donkey, the classic symbol of a fool.

We have a king who rides a donkey – where shall we be in this great reversal? Call me a fool if you will, but I’m with Alexamenos.