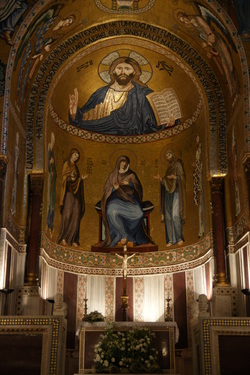 At this very moment in crowded streets, and in dilapidated shanties of tin and cardboard, men and women are tending the sick, comforting the dying, teaching the children of the slums to read, and lending a street trader a few dollars to continue his trade. Ask them why they do these things, and they will reply ‘we do it for Jesus. He wants us to care for those broken and worried.'

At this very moment on a street corner or in the market place a young voice is shouting of the glories of Jesus, of his saving death and his call to all people. Around him others with musical instruments sing that same message -  trying to make themselves heard amongst the hubbub. They do it because Jesus has told them to share the message.

At this very moment in thousands of buildings across Europe people are singing, praying, talking, and thinking of Jesus. Trying answer for themselves that question, ‘Who do people say that I am? Who do you say that I am? Who is this Jesus?

Is he the Jesus of the Revolutionary; the peoples co-operative; the campaign for a fair wage or the end of indentured labour; or the one who risks so much to expose people trafficking? Jesus seen in the faces of the oppressed, heard in the voices of the poor, working in the struggle of those who try to break the chains of enslavement to racism, class divisions, sexism, violence, abuse, totalitarianism?

Or, is he the Jesus of the pious Christian, conscious of being saved? The personal Redeemer? The Saviour of the one who says ‘you washed away my sins with your own precious blood giving up your life for me, wretched sinner that I am, so that I could live again. Once I was in captivity to sin, now I am in captivity to you and it is the only true freedom.’

Or, is he the Jesus of the devout but more strait-laced churchgoer? The one who says that ‘I am strengthened by Christ's presence in the sacraments. Fed with the bread of life, fortified with life-giving wine. Welcomed into the earthly community of faith through baptism, and at the end of my life to be welcomed into the eternal community of heaven

Is he this Jesus or that? The question who is Jesus finds an amazing confusion of answers. I don't think that should dismay us since it's a sign that we're talking about a living presence. A God active amongst us who refuses to be trapped in our understanding or our comfortable religiosity.  ‘Who do people say that I am? Peter glimpses the truth and proclaimed it ‘you are the Christ, the Son of the living God.’ In the Gospels of Matthew, Mark, and Luke this is a turning point. The significance of Jesus' ministry is recognised for what it is. If we read on, however, only moments later Peter lapses back into conventional wisdom, thinking of Jesus’ Messiahship in the way of common expectation, unable to see and accept the consequences a Jesus kind of loving. 'Lord, this suffering must never happen to you,' he says. And Jesus sternly admonishes him. Perhaps Peter’s answer had been too glib, too easy, impetuous as he always was, unable to come to come to terms with the costliness of the love which transforms, which doesn't demand; that simply offers, which turns the world upside down and recreates people touched by it. Who do you say that I am? What does this Jesus achieve for our world, for the suffering, for you and for me?

This is an extract from a Catholic priest's diary (With Open Heart by Michel Quoist (Gill and Macmillan, 1983):

This morning I discovered the extraordinary power of Christ's love at the bedside of a dying man. I sat there not knowing what to say. What can anyone say to a dying man?  I watched him. I thought him ugly, this old man with a face ravaged by wrinkles, oiley with perspiration, where who knows what mysterious bombardments dug those red and black craters in the stubble of his beard.

His wife held his hand as he lay there motionless. She leaned over him ‘My dearest, the father is here to say hello.’ Then, as if she had forgotten my presence, she caressed the old man tenderly. ‘My love, my beautiful love,’ she whispered. I was a little embarrassed and taken aback by her words. How could anyone be so blind? I thought. No doubt about it, love is blind.

Then something extraordinary happened. Responding to his wife's tenderness, the old man opened his eyes and a pale, tremulous smile hovered across his lips, a smile that was like the sun trying to pierce through dark clouds. He looked at his wife for a long time, then the clouds dispersed as he smiled widely, his whole face glowing. Then I saw it. I saw what she'd been seeing all along. He was handsome. She was right, oh so right! Love isn’t blind. On the contrary, love lets you see what others don't. It lets you see beyond the physical person, lets you see his real self, unique; as only those who love each other can see, know and admire.

Who do you see in this Jesus? What difference does he make to your world?

Let your light so shine before others, that they may see your good works, and give glory to your Father in heaven.