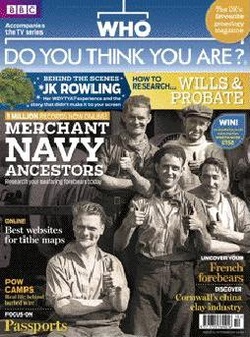 “Who do you think you are?” she bawled at me across the church. I can’t now remember what I’d done, but I remember Mrs Harding’s challenge with absolute clarity. If it had been possible for steam to come out of her nose and ears, it would have!

“Emilia Fox, part of the Fox theatrical dynasty, wants to find out just how far back the family's acting roots go.” So runs the blurb for an episode of the popular family history show, Who do you think you are? It continued, “Emilia also discovers, in an extraordinary tale of rags to riches, that her great great grandfather, Samson Fox, made one of the most important inventions of the 19th century. Born into an impoverished family, Samson started work in a Leeds textile mill when he was just eight years old, but ended up becoming one of the richest men in Victorian Britain. As Emilia investigates further, she discovers how her illustrious ancestor was later touched by scandal.” Who do you think you are? Fascinating stuff.

The chief priests and the elders are definitely in the Mrs Harding category. Who do you think you are?!! What gives you the right, Jesus, to do and say these things in this holy place? On the day before this encounter, he had come into the holy city surrounded by a great crowd exalting him as king. And according to Matthew he then went from the streets into the Temple and overturned the tables of those engaged in their quite proper trade servicing the needs of pilgrims and worshippers. Then here he is again, this time—as will become obvious—setting himself up to teach in this holy precinct. Who do you think you are?

Jesus turns the tables on those who challenge his authority by posing a difficult question: “Did the baptism of John come from heaven, or was it of human origin?” It’s a great one, that! “Who do you think John was, where did his authority come from?” John promised forgiveness of sins to those who were baptized. Hear that for the affront it was to the religiously important people who belonged to the Temple. They were the ones who insisted it was sacrifices in the Temple that took sins away. If they now say John was doing God’s work that puts the kibosh on everything they do and hold dear. If, on the other hand, they say John was a charlatan, the crowd will be down on them because the ordinary people thought he was a holy man. In a city full of wary Roman soldiers expecting trouble, who knows what disorder might lead to. The chief priests and elders decide to say nothing—how that must have galled them, these proud characters who usually had a lot to say for themselves.

Then comes the coup de grace: Jesus turns the “Who do you think you are?” question on his questioners, but in a story—a story of two sons. Now stories of two sons are a familiar theme in Jewish tradition (particularly Cain and Abel, and Esau and Jacob), and that makes this little parable all the more powerful to everyone who hears it that day. It’s a tale about a father giving work instructions for the vineyard to his two sons; one demurs but eventually does the work, and the other readily says he’ll do it but doesn’t.

A simple story of grape growers—except, of course, it isn’t. They all know this is really about who are God’s people—God’s vineyard—determined by the choices people make: who does what the Father wills? Who do you think you are? Do you think you are doing the Father’s will? The way the story is told, the chiefs priests and the elders have to admit that the son who said “no” is the one who did the father’s will: but they admit it through clenched teeth because they know where this argument is going.

Jesus hammers the point home: notorious sinners—those who had originally said “no” to God—will take their places in the lush and joyful vineyard of the Father because when they heard John’s call to repentance they responded. And the religious elite? Well, they’re still outside the fence, wistfully looking over it and wondering whether the delights of the vineyard will ever be theirs. John came in the way of righteousness, says Jesus, but they refused to recognize it—just as they are refusing to recognize that same righteousness in Jesus himself.

Who do you think you are? They thought themselves children of Abraham, but John said God could raise up children of Abraham from stones if he wanted to! What a turnaround. John’s baptism puts a question mark against all those generations of circumcision, sacrifice, and purity laws. John is dead and gone—but his invitation to experience God’s forgiveness doesn’t die because Jesus won’t let it. Jesus still offers the invitation; still lives its freedom; still lives its grace, still remains obedient to the Father’s will. And that’s more than the chief priests and elders can take. No wonder that on Friday of the same week they take counsel together to put Jesus to death.

We’ve got to think on this incident careful. Who do you think you are? Who do you identify with in this Temple court? Those who do the will of the Father? Probably ... but remember how they are characterized here, and I don’t just mean the generic tax collectors and prostitute label. For example, have you considered the circumstances of the family triangle in the parable? It is set in a peasant village where the houses are rudimentary and most activity takes place outdoors. What we mean by privacy didn’t exist, and the rules of social place and honour applied in every circumstance. For the first son to actually say “no” to his father was a deeply shaming thing—everyone knew about it, everyone commented on the lack of respect, the father was derided for his lack of authority, the family was the subject of gossip. In other words although the son eventually does the Father’s will it as at great cost to the Father’s prestige and standing in the community—shades of the Father in the parable of Prodigal Son perhaps? Is the parable telling us how costly it is for the Father to give his children the freedom to find out who they think they are for themselves?

Disarmingly the expression ‘will of the father’ occurs four other times in Matthew’s gospel, and always in the context of Jesus’ instruction of his disciples. Jesus’ own prayer is that he might do his Father’s will (26.42). Surely Matthew is urging his own community to follow the ‘good son,’ – to do the Father’s will. And through his words to them, he urges us to do the same.

Who do you think you are? A naysayer like the first son in the parable? – well, yes. A fearful disciple who’s ‘yes’ becomes ‘no’ at a crucial moment, like Peter? – well, yes. A hypocrite like the tax collector whose devious secrets and practices give the lie to all outward show of respectability? – well, yes. In these, and many things I must admit the reality of all too human, human reality – the sin that clings so easily, that comes to hand and heart so easily, that is so destructive – that too often just seems natural to us.

But Jesus doesn’t do what comes naturally. He does the Father’s will. He does what love chooses, and that means determination, resolve, and free choice. The mind that was in Christ we heard of in the Philippians reading has an implied comparison, and that comparison is with the stereotypical person ‘Adam’:

Christ like Adam was a being in the image of God,
like Adam he was in human shape,
but unlike Adam
he did not think equality with God was something to be exploited,
he took the role of being God’s servant,
he humbled himself,
he was obedient even to point of death.

In all these things Christ did the opposite of Adam, the typical person. That was his mind; that was his determination. ‘Let that mind be in you,’ says St Paul. And hear as good news—gospel—that when you fail in that noble thought you can turn, be transformed by God’s grace, and do the Father’s will. Then you will know who you are.