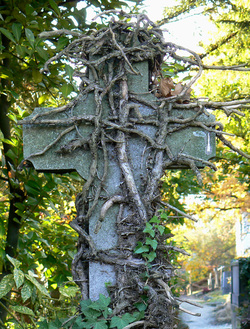 A health farm set in a spacious 18th century mansion with luxury bedrooms suites, each with its own Jacuzzi, and a restaurant serviced by two cordon bleu chefs, seems to be something of a sell-out. Notions of a simple, healthy lifestyle  overlaid with the delights of the opulent. Isn’t it the case that the one is an evident sell-out of the other?

A vast shopping centre proclaims itself as offering easy access to a huge range of products and  services to all, but the need of a car to avail yourself of it, and the fact that you see above you steel shutters that mark this out as most definitely not open public space, seems to be something of a sell-out of the principles of open access.

Arrangements in one direct, so often amount to sell-outs in another. For us the contrasts of the market, free choice, social provision, and mutual care, come at us from all directions. The dilemmas hit us again and again.

Today’s Gospel reading takes place near the city of Caesarea-Philippi –this is the city of the sell-out. Here the Jewish faith, the Jewish way of life, the Jewish  understanding of community, has sold out to the all pervading power of Greek ideas and Greek ways of doing things, and the Roman imperial structures that are the latest expression of those Greek influences. Like MacDonald’s in Moscow – the foreign has wholly displaced the local.

This is a new town - only about 35 years old – a sign in itself of that thrusting adaptation to all that is modern. It was built by Philip Herod, son of Herod the Great, at the site of a grotto sacred to the worship of Pan, hence its first name, Paneas.
Earlier still it had been associated with the worship of the Baalim. So it is a place of struggle between the old pagan gods and the one God. When Philip Herod named it Caesarea, the winning side was all too obvious. This is the place of the sell-out.

A similar struggle is going on in the hearts and minds of the disciples. They thought of themselves as faithful Jews, inheritors of the promise of Abraham, people who would never compromise their faith as Philip Herod had done. I suspect they felt very uncomfortable in this place – they were at the very far north of what was considered Palestine– here the power of the pagans was all too apparent. Further south, although the Roman Empire controlled the place politically, at least they and people like them, outnumbered the imperial forces. Their Jewishness still predominated there –but not here – and the threat of it is tangible. But they know where their true loyalty lies – no sell-out. To them Jesus fits their
understanding of life, of power, of right relationships. How wrong can you be?  They had sold-out – and Jesus is all too clear about that.

He had asked them who people considered him to be. That’s the beginning point for our passage (in the pew Bibles on page 42 of the New Testament). It is Peter, of course, who comes up with a momentous answer: “You are the Messiah, the Christ.” Understand this, for we take this to be a religious term, the “Jesus Christ” of our creeds and theology, we assume to be a kind of religious surname. That’s how we see it, 2000 years on – but that’s NOT how it was heard then. Near Caesarea-Philippi – where the roads, the buildings, the very livelihoods of the people, blaze out “Roman is all powerful,” Peter uses a term that speaks of another political power. Jesus, he is saying, is not simply a religious teacher, he is not simply a great prophet. NO, he is a royal figure who will restore the political fortunes of Israel. Peter is saying that the revolution is beginning, NOW. We will triumph because we have a leader. Peter has no idea, but this is the greatest sell-out of all – and Jesus immediately silences him, sternly ordering that this should not be spread abroad (v30 that comes just before our reading). If Caesarea-Philippi is a sell-out to imperial power, well so is Peter.

Jesus presents a counter-confession, he is not Messiah but “Human One,”and Peter is the mouthpiece of Satan.

Jesus is on the way, but are the disciples on the way with him? Remember the earlier words of Jesus in the parable of the Sower:
“The sower sows  the word.  And these are the ones on the way, on the path, where the word is sown; when they hear, Satan immediately comes and takes away the word sown in them.” (4.14)

The battle rages in the heart and souls of the ones who would be disciples. Those on the way find Satan very close and eager to divert them. The battle rages in our hearts and souls. Verse 33b lacks power in translation – “You are setting your mind not on divine things but on human things” – it’s about conviction, commitment – using a word that only appears this once in Mark’s gospel. What he is saying is that there is no middle ground, you are either for the Jesus way, or you’ve sold-out. Mark is telling us that we’ve arrived at the very heart of the conflict – and it is not “out there,” it is not someone else’s problem. No, it’s here – in our wills, in our choices, in our loyalties. And it has been like that from the start – the ones who would go on the way with Jesus are always tempted to sell-out.  This is addressed to us – will we sell-out?

When you are tempted to say “That’s not fair.” Faith has no price. When you say, “I can’t do that. I won’t do that” – never thinking that discipleship applies to the whole of your living – the simplest things of your behaviour. Faith has no price. When you say, “that’s nothing to do with me.”Faith has no price. When you fall for the easy shams of corrupting possessiveness. Faith has no price. In a million and one ways we stand with Peter and against Jesus. “At that moment the cock crowed for the second time. Then Peter remembered what Jesus had said to him … and he broke down and wept.” Satan’s mouthpiece turned to the rock of the church’s foundation. This choice has got to move our hearts and our heads, be of actions, turn on its head the way we look at living – in getting it and fixing it in his soul, Peter is changed.  t is no
coincidence that tradition has Peter being crucified upside down – his discipleship literally turns the way he sees things upside down, and the cross of Jesus is the lens that enables this new vision.

Notice two things about the cross of Jesus in this passage. First, Jesus speaks of it quite openly, in a way that includes not just the disciples, but the crowd and those who pass-by, – this is a public call to discipleship. Those who would follow
this way are asked to do something that is open and public. Those three imperatives of discipleship:

Second, there is no confusion about what cross means to those who are listening to Jesus. It has but one association in the Roman Empire – it was the way dissidents were executed. There’s no getting away from the political ramifications of it. Two thousand years of piety pushes the cross safely into religious experience alone, but when Jesus used the word he was talking about a political and military punishment. It was inflicted on slaves, violent criminals, and unruly elements
in rebellious provinces – not least Palestine –those who had no rights, those who had to be suppressed to maintain the empire, those who were expendable to safeguard law and order. Jesus asks his followers to face the consequences of
daring to challenge the all-encompassing power of imperial Rome. Not to sell-out to it, the self-denial is that required of the one standing accused in the courtroom making the choice for Jesus and knowing the likely consequences. That brilliant commentator, Ched Myers, explains it this way:
The threat to punish by death is the bottom line of the power of the state; fear of this threat keeps the dominant order intact. By resisting this fear and pursuing kingdom practice even at the cost of death, the disciple contributes to
shattering the powers’ reign of death in history.  (Strong Man page 247)

A story will cloth the bones of theology. In Moscow in 1941, the streets were lined with people, mostly women, waiting for a great parade of German prisoners. The atmosphere of hatred was palpable. Nearly every woman had lost husband, father, brother or son, and now was the chance to desecrate the symbols of those who had killed their menfolk. The Germans came into view …thin, unshaven, wearing dirty blood-stained bandages, hobbling on crutches or leaning on the shoulders of their comrades ... the streets became dead silent. An old woman pushed through the crowd, past the police cordon and, taking something from her coat, pushed it into the pocket of an exhausted soldier – a crust of black bread.
nd now suddenly from every side women were running towards the soldiers, pushing into their hands bread, cigarettes, whatever they had. The soldiers were no longer enemies. They were people.

Jesus calls us together, calls us to take up the cross, calls to choose true life – that is the kingdom. Pursuing kingdom practice means overturning the forces of death wherever they show themselves. Anything less is a sell-out.


Acknowledgements: this is a homiletic reworking of ideas from Binding the Strong Man: A Political Reading of Mark’s Story of Jesus by Ched Myers (Orbis Books, 1988), the source of the concluding story has been lost. Information to rightfully attribute it would be appreciated.