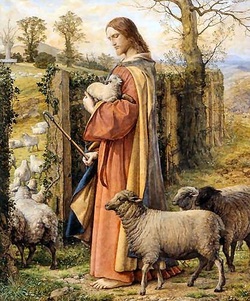 The artist William Dyce died in 1864. Although he wasn’t closely connected with the Pre-Raphaelites you can see some commonality with
them in his pictures. Like them he preferred to depict his subjects in a highly detailed way, romanticised and idealised no doubt, and yet with a dramatically realistic quality to them. His picture of the Good Shepherd dates from the mid 1850s. In it he has modernized the scene to the lowlands of Scotland in his own day – the elm trees, the fencing, the trough, the apex roof of the farm building at the top of the hill, the decidedly well-bred western sheep, and the metal shepherd’s crook.

And yet Dyce plays with the viewer because the figure of the shepherd doesn’t wear a Victorian farmer’s clothing, far from it. These are the splendid colours and flowing robes of a medieval knightly figure – the
clasp, the lining, the golden thread pattern just visible, the brocade of a
wealthy or even royal figure. This is no workaday shepherd. His bare feet a working man’s nightmare! Stranger still, the trees also are bare and yet there are flowers blossoming at his feet amongst the grass and stones.

A quick glance at the picture and it appears to be realistic, or perhaps at most a nostalgic, misty eyed gloss on Jesus’ words; but look at it longer and it becomes obviously unrealistic, a complicated canvas of unexplained occurrences and symbols, a challenge as much as a reassurance. Who is this bare-foot king clutching a lamb to his finery? It’s confusing, and perturbing, and not what the viewer once thought.

And the words are as perturbing as the picture: ‘The good shepherd lays down his life for the sheep.’ We’ve heard it so often we don’t actually hear it. It’s not just that so very few of us know anything about sheep or shepherds so we can’t make the connections between the words and our experience of God so easily. No doubt that’s true. We actually can’t hear this metaphor as our forebears would have heard it, let alone first century Jews in Palestine. Maybe there is a case to translate it to something we could understand more easily: I am the good bus driver; I tell my passengers where to get off. I am the good HR manager; I  sack myself first. I am the good neighbour; I never park across your house
front. I think not.

No, the words should stay as they are, but we have to try to hear them anew – as Dyce tried to in this picture. Some
possibilities:
Does ‘good’ in Good Shepherd refer to ‘good’ in the sense of effective and capable? How can it? Surely the capable shepherd doesn’t allow his sheep to get into the terrify place where the only option is their death or his? And what’s efficient in the shepherd dying when the shepherd is so much more valuable than the sheep? If he survives he can bring on a new flock – sheep left to their own devises won’t be able to. Don’t think me fanciful in raising this – Saint Augustine recognized the problem in the fourth century.

This isn’t about capabilities. So we can’t take the image of shepherding and apply it to ourselves. There will be one shepherd, one alone  (v 16). This is about the nature of Jesus himself. He is the ‘Good’ Shepherd as God is the shepherd in psalms 23 and 78. He is the model shepherd the prophet Ezekiel looked for (Ezekiel 34); the one who is not like the self-serving, ignoble and shameful leaders who exploit the flock that is the people Israel. Forget them – the only one to be trusted to shepherd with grace and mercy is the one who knows God’s heart intimately, and Jesus said, ‘just as the Father knows me and I know the Father’ (v.15). Jesus it is who embodies this quality of good, and no one else. Jesus it is who acts as the Father acts, and no one else.

We are to surrender ourselves to this good shepherd, and this good shepherd alone. We are all in this together. And the shock is that we don’t know who else is in this flock. He will shepherd all who respond to his voice. One flock; one shepherd. As that great missionary bishop Lesslie Newbigin put it, ‘There is no other good shepherd, no other who can lead the entire human family into fullness of life, except him who laid down his life for all.’ The unity of the Church and the  unity of humanity cannot be separated from each other. The Church’s unity is a sign and foretaste of humanity’s unity. We are all in this together. All of a sudden this talk of a flock isn’t as churchy as we thought it to be; and the
Good Shepherd isn’t an example of our human capabilities.

We begin to hear the words anew. In the Dyce picture Christ is amongst the sheep, walking with them through a narrow gate into a pasture that is in bright light. The trees are barren as yet, but the promise of a new life is there in the arms of the shepherd. The one who is the Lamb of God carries the new life – the only lamb in the whole picture is the one nestled at his elbow. Here is the promise of life being brought to the flock. This shepherd is returning to the whole flock as king –the royal robes so obvious. But this is a king who walks barefooted on this earth – his very foot-print in the soil of
our experiences, and the grassy slopes of both shadow and light. The king who gives everything for his people, the shepherd who suffers death for the sheep.

A shoe factory sent two marketing scouts to a region of Africa to study the prospects for exports. One rep sends back a telegram that reads,
Situation hopeless STOP No one wears shoes STOP
The other rep writes triumphantly,
Glorious opportunity STOP They have no shoes STOP

The shepherd with no shoes brings the opportunity and hope only he can bring to all his people:
Know ye that the LORD he is God: it is he thathath made us, and not we ourselves; we are
his people, and the sheep of his pasture.