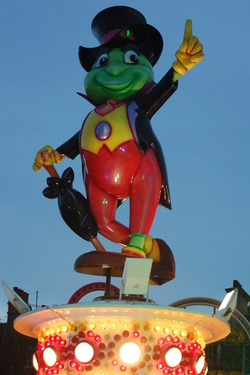 This week there's no avoiding football; just like there was no avoiding the Jubilee a few days ago.  Our media world gets hooked on a story
and there’s no way around it for a while.  I suppose that must be the performer’s, or the film director’s, or the author’s dream – to fill the headlines for a while.  Remember the Harry Potter craze or all the hype around the Da Vinci Code. When was that?  Five years or so ago?

A friend of mine eventually caved in and went to see the film of the Da Vinci Code.  He was a little late, so it took him a while in the gloom to realise that there was dog sitting on the seat next to the man in the row in front.  The dog was sitting upright and seemed to be watching intently.  This was confirmed when the animal growled as the villain appear on the screen, and whined when the heroine got into trouble.  When the hero made good their escape, the dog barked encouraging approval.  My friend was transfixed – the dog was more interesting than the film!

Anyway at the end he just couldn't resist it.  He lent forward and tapped the man accompanying the dog on the shoulder, ‘Excuse me, but I have to say I'm amazed at the reaction of your dog.’  ‘Yes,’said the man, ‘so am I, 'cos he hated the book.’

I wonder when you realised it was a joke?  Quite early on I suspect.  It has a certain 'shaggy dog' style to it that let's you know what's coming.  Of course it breaks a good rule of preaching – never tell jokes in sermons is the accepted wisdom.  My defence is a sentence from the great Danish Christian thinker Kierkegaard, who wrote somewhere:
Humour is also the joy which has overcome the world.

Contrast that with another great Christian thinker and preacher of 1400 years earlier, John Chrysostum, who insisted that Jesus never laughed.  And he is certainly correct in so far as there is no mention anywhere in the Gospels of Jesus
laughing.  But I can't believe that someone so obviously full of life as Our Lord could have lived out his thirty or
so years on earth without a guffaw or even a giggle now and then. Indeed today's gospel convinces me of that.
The man and the dog is easily recognised as a joke, but no one laughed at the mustard seed story and perhaps we should have done.  Certainly it's a far from straightforward illustrative story.

For a kick-off (sorry, football reference!) a mustard seed isn't the smallest of seeds. Sure it is tiny in comparison to a broad bean, but have you ever sown onion seed?  And there is no way that a full grown mustard plant could be reckoned to be the greatest of shrubs.  Wouldn't a great shrub grow to 10 or 15 feet or more? (3 to 5 metres).  Mustard might grow a few feet if you left it, but that really is all.  And as to birds nesting in it and enjoying the shade?  No way.  What is going on in this story?  This is no mustard plant any of us have seen.  Was Jesus a failure at GCSE biology?  Had the sun addled his brain that day?  Of course not.

I think Jesus is being deliberately OTT.  This is the joker's exaggeration; the satirist's hyperbole, the teacher's
amplification.  If he'd said, 'A mighty oak from a single acorns grows,' we'd all say, 'So what?'  Nests in oak trees are no surprise.  Who hasn't looked for a big leafy tree to shelter under on a scorching hot day?  And that's maybe the point.
We all know what big, strong trees can stand for. Or we think we do.

Centuries before Ezekiel had used a tree to tell a parable.  He said, yes God could take a tiny cutting, a slip of a twig from the top of a cedar tree, plant it on Israel's mountain heights, and it would grow great boughs and become a mighty
noble tree with all kinds of birds living in its shade and protection.  But, said the prophet, just as God makes a great thing grow from a tiny slip, so too he can dry up the life in the greatest of trees and make them topple. What that seems to be about is little Israelmaking alliances with Egyptin order to get out from under the power of the Babylonian empire.
Hiding under the shade of one force, they hoped they'd see the end of their oppressor. 'Fools,' said Ezekiel, you've got no idea what's growing or what's dying– the cutting or the mighty tree.

Hear Jesus' parable in the light of Ezekiel's.  All too easy to shelter under the wrong thing– to rely on power, privilege, prestige, money or whatever.  Sit on the branch of someone else's authority and think yourself safe from the ravening wolves of personal responsibility and action.  But watch out the branch is about to crack and you don't know it!

Saint Paul tells us that the puny, little church is a new community whose people no longer live for themselves but for Christ, and that means for one another.  Christians no longer look at one another from a human point of view – no, they see each other as parts of Christ.  This is a new creation.  We're as puny as mustard seeds and as easily ground to dust, but we are a new creation. Small and fragile we may be, but with God we cast a shadow and become home for God's creatures.  It's all a question of knowing on whom we should rely. So it's trust, learning to trust God; but also patience as
well.

That I think is where the first of the seed parables comes in.  The seed is scattered on the ground, and it grows and bears a harvest.  And it’s a mystery – remember this is about non-irrigated agriculture, as in so much of Africa today.  Those seeds find the moisture to grow where we can see none – a miracle indeed.  By the inscrutable processes of life a rich and nourishing harvest is made.

Be brave little church – God's rule grows in ways you cannot fathom.  Its fruit is rich blessing.  Others might think you a
weed, like mustard amongst wheat, but you're not.  You are something that can bring God's shelter to others, as unlikely as
it seems.  Be patient, trust God.

All those years ago Rambling Sid Rumpold used to say in the show ‘Round the Horne’ on the radio, ‘The answer lies in the soil.’  And aren't we being encouraged by Christ to keep our feet firmly on the ground, on the soil.  Don't look to the grandiose, the worldly standards that fool so many, God wants to live with you right here in the ordinary.  The pupil said to the Rabbi, ‘In the olden days people use to talk and walk with God, why don't we any longer?’  The Rabbi answered, ‘Because nowadays no one can stoop that low.’  Don't look at things from a human point of view; get low enough to see things from God's point of view.  They say that the grass is always greener on the other side, but that's  only because they use more manure.  Keep yourself earthed.

This is the fool's reversal – mustard plants with nests in, crops from dry dirt – so odd it makes you laugh, but because it makes you laugh it lets things into your heart and mind. Remember Tom Cooper, ‘Just like that,’ the magic trick failed but the laugh was always great.  God's reverses our expectations and our demands – but joy, lasting joy comes with it.  For the giggle or the belly-laugh lifts you out of yourself and changes what you see and how you feel.  You really are a new
creation.  You better believe it – trees of hope can grow from the tiny mustard seeds of patience and trust.