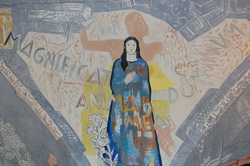 Why are estates  built like that? Houses in plenty, but other facilities missing.  No pub, no playing field, no hall or community centre.
Well that’s not quite truth - there was the meeting room in the centre of
the sheltered housing complex, but only wrinklies, as the kids on the streets called them, were allowed to use it.  And there was another small hall too, one of those cedar-wood buildings, that was used by a pre-school playgroup.  The teenagers of the estate would sometimes gather on the brick wall that surrounded this little hall.  But after parts of the wall got pushed over one evening, the caretaker made it his job to move them on whenever they congregated there.  Often his efforts met with a lot of shouting and swearing, but they nevertheless moved on, and the caretaker would return to his house muttering about the state of kids today, and how when he was a lad they would have had a good hiding for language like that.

As you can imagine then, Marguerite’s idea of using the little playschool for a youth club wasn’t welcomed by everybody.
“Surely you’ve got enough on your plate with your own children,” they said. But Marguerite was determined and managed to persuade the Church Council, who owned the little hall, that such a youth meeting was needed.  She had to give all sorts of assurances about no damage and being careful with the furniture and keeping the noise down and being strict in supervision, etc. etc. etc.

And so it began.  She begged old equipment from friends - a pool table, some boules, cards, and darts.  Lots of youngsters came - some weeks as many as thirty.  Often they weren’t interested in what she had planned, or at least wouldn’t admit to it.  It was often as if they had just transferred their hanging around from the pavements or the doorways of the half dozen shops on the estate to the little playgroup room.

Who were these kids?  Well they were people like Siobhan, still at school, who liked to appear dead fashionable, and swore a lot for effect. Or Mike, also still at school, but who had a job in a nearby supermarket so had more money than the
rest.  The booze and cigarettes he bought made him a popular guy.  Then there was Jordan, who was on some training scheme, but didn’t seem too enthusiastic about it.  The younger ones like Tom, Judy, Mark, Ryan, and the others, were all still at school, but liked to appear tough and carefree like the older ones.  Then there was Terry, the real hell-raiser of the group. He had left school at the earliest opportunity, but no jobs had come his way.  He said he was making a  career of hanging around!  Dead cool - that’s how Terry liked to think of himself.

They came week  after week to the club. And every week there was something for Marguerite to put right, or to give an account of, to a cross playgroup leader or hall caretaker.  There was the occasion someone painted on the floor using the playgroup paint pots.  Or the time the toilets were blocked with boules when someone tried to flush them away.
There was the occasion of graffiti on the door - I won’t tell you what it said about Siobhan, except it implied she was very athletic and physically flexible. When a set of woman’s underwear was hung as a flag from the TV aerial, the caretaker got seriously angry.  When it was discovered the clothing had been stolen from a washing line further down the street, his anger boiled over, and a heated argument followed.

But still Marguerite kept it going. She almost felt that she was being tested somehow.  Terry it was that she thought really responsible for the mayhem.  She had her suspicions that he was the one who let her bike tyres down.  When the lock of her car was vandalized, Terry was in the hall with the rest of them, but she still had her suspicions he had arranged  somehow.

It was Terry who one week asked her why she bothered with them.  Why she put up with all the aggro?  Her reply didn’t cut much ice with him, she simply said “For love.”  When he pressed her and she mentioned “Jesus,” he swore and laughed and rejoined the others in the group.  Nothing was said again, and the pranks, and the muddle, and the bad language continued.

The week Terry appeared on a large and very flash motorcycle impressed everyone, even Marguerite.  She asked him how he could afford it.  “Odd jobs,” he said, but Marguerite didn’t believe him.

It was late evening two days later when there came fierce banging at the door of Marguerite’s house.  It was Siobhan, Terry had had a serious accident on the motorbike.  It had happened on the main road only minutes from the hall.
Terry had gone under a bus and his legs had been run over.  He was asking for Marguerite. He lived with his Dad but he was out, no one knew where.

And that’s how Marguerite came to spend her Christmas Eve holding a frightened young man’s hand in a casualty unit. “I knew you’d come,” he said.  And that’s why she was still there waiting as he came around from the anesthetic early Christmas morning.  And why through long months of recovery she came every day to see him.  “That lout ’s not worth the effort,” said the caretaker, “he’ll never be any good,” but still Marguerite went.  If you’d asked her why, she would have said, “For love.”  What she wouldn’t have told you was the story of a teenage girl years ago, who sold herself for money - only twice, but that was bad enough - sold for money to buy booze and drugs.  And of one volunteer youth worker whose befriending of her turned that girl’s life around. No, she wouldn’t have told you about that.  She wouldn’t have told you that grace and mercy ruled in her life because of another person’s living of it.